Singapore, August 22, 2016 — Hitachi, Ltd. (TSE: 6501, Hitachi) and the Bank of Tokyo-Mitsubishi UFJ, Ltd. (BTMU) today announced that they have started Proof of Concept (PoC) testing for using blockchain technology*1 for digitalization of checks in the Republic of Singapore.
In this PoC testing, Hitachi and BTMU communally developed a system in which blockchain infrastructure are used for issuing, transferring and collecting electronic checks. Using the system, BTMU issues and settles checks and some of Hitachi Group companies in Singapore receive the electronic check and deposit the funds.
Through the PoC testing, Hitachi and BTMU will be able to identify issues from various perspectives such as technology, security, operation, and legal perspectives, and aim to realize new FinTech*2 services including digitalization of checks.

The Monetary Authority of Singapore has recently released a consultation paper on proposed guidelines for a regulatory sandbox framework to facilitate the advancement of FinTech services. With the framework, this PoC testing aims to identify issues for practical use, issuing and settling check by blockchain technology on a system developed by Hitachi Asia Ltd., the Asian regional headquarters of Hitachi, Ltd. and BTMU as one of the collaborative creations between Hitachi and BTMU in the Asian region.
The digitalization of checks makes it possible to automate the workloads of intermediaries for checks in financial institutions, to avoid tampering and to speed up settling checks. In addition, it is expected that similar approaches can be applied to payment and supply chain finance in non-financial sectors in the future.

Based on this PoC testing, Hitachi and BTMU will increase efforts towards putting blockchain technology into practical use, and will contribute towards the global expansion and evolution of financial services.

Vision for the Future 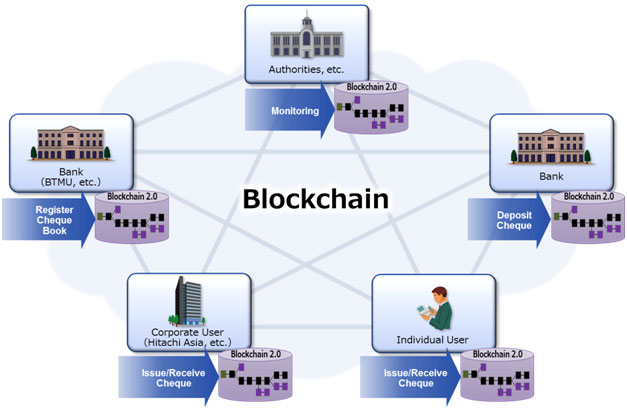 About The Bank of Tokyo-Mitsubishi UFJ, Ltd.

The Bank of Tokyo-Mitsubishi UFJ, Ltd. (BTMU), a member of Mitsubishi UFJ Financial Group, Inc (MUFG), is Japan’s premier bank, with a global network spanning close to 50 countries. Outside of Japan, BTMU offers an extensive scope of commercial and investment banking products and services to businesses, governments and individuals worldwide.

In the Asia and Oceania region, BTMU has presence in 13 key markets with 33 offices and close to 4,000 employees serving largely corporate and institutional clients. Singapore serves as the regional headquarters for South Asia, South-east Asia (ex. Thailand) and the Oceania region since July 2013, while the regional headquarters for East Asia including China is located in Japan.