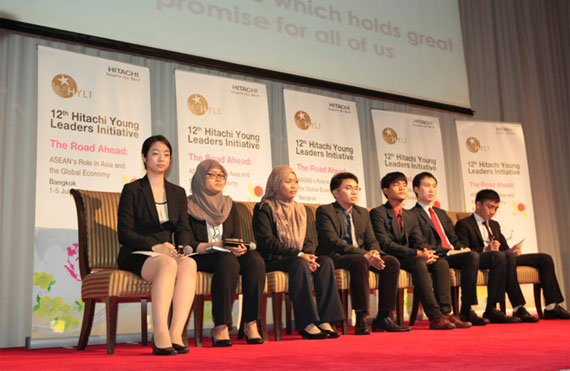 Bangkok, July 5, 2013 – Hitachi, Ltd. (TSE:6501) today announced that it hosted the press conference on 4 July for the 12th Hitachi Young Leaders Initiative (HYLI) students who shared their thoughts and recommendations under the theme ‘The Road Ahead: ASEAN’s Role in Asia and the Global Economy’. The event, held in Bangkok from July 1 to 5, 2013, sees the gathering of key regional politicians and thought leaders to speak on the said subject.

A regional corporate social responsibility program by Hitachi, Ltd., HYLI has, for the past 17 years, provided young people with a platform to exchange ideas on pressing issues in Asia.

After interaction with the distinguished speakers on the first two days, the students conducted three days of intensive workshops and expressed their ideas on the theme ‘The Road Ahead: ASEAN’s Role in Asia and the Global Economy’, as well as sub-themes ‘AEC 2015: What can ASEAN really expect? Asia’s significance in the global economy’ and ‘Connectivity: The driver of ASEAN competitiveness’. They also participated in field trips, community activities and a cultural tour that enhanced their understanding of the themes.

“We are delighted to see our future Asian leaders taking ownership of the current issues affecting the ASEAN region by working together with their fellow HYLI students to propose solutions that have the potential to inspire positive change,” said Ms. Yukiko Araki, Executive General Manager CSR Division, Hitachi, Ltd.

“HYLI has not only given me the chance to voice my ideas on how and in which ways I would like to see my country developing, but also fostered cross-cultural understanding among our friends in Asian countries,” said Mr. Aekarak Sethi, one of the 12th HYLI students from Thailand.

The “Hitachi Young Leaders Initiative” (HYLI) is a community relations programme that aims to identify and nurture potential Asian leaders by bringing them together to discuss regional issues with influential government officials, prominent business leaders, academics and NGO representatives. Since its inauguration in Singapore in 1996, the HYLI has been successful in bringing the best and brightest students in Asia together. Currently, the seven HYLI participating countries are Indonesia, Malaysia, the Philippines, Singapore, Thailand, Vietnam and Japan. The initiative offers student participants a unique platform to broaden their outlook on regional and global issues while promoting Asian values and cross-cultural understanding. For more information, please visit http://www.hitachi.com/society/global/hyli/